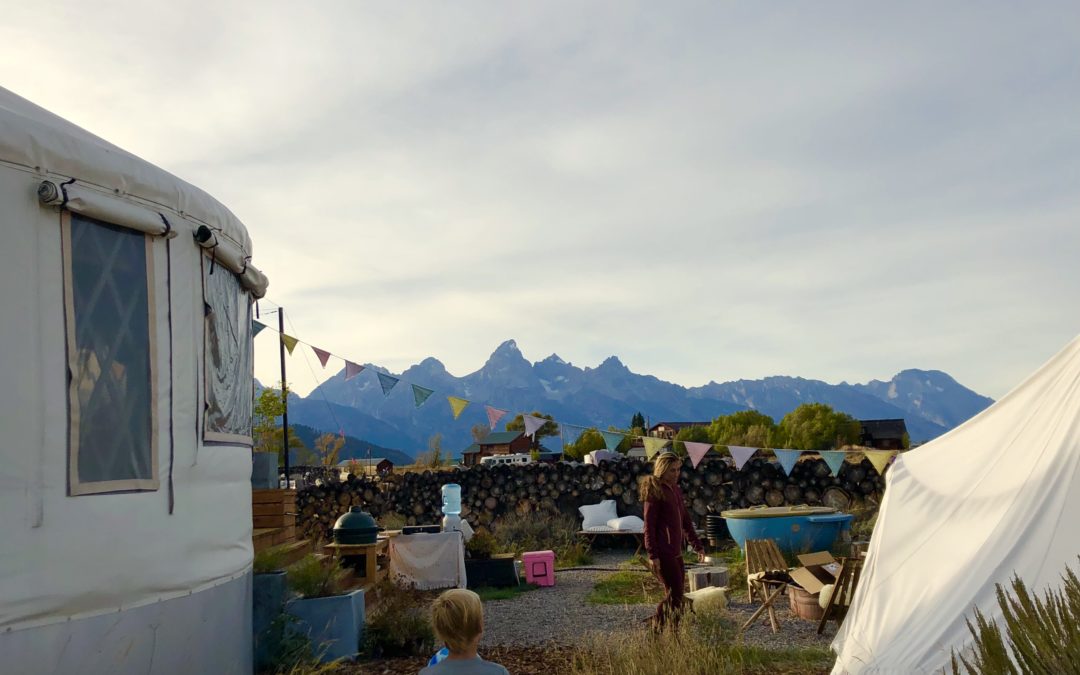 From Wyoming, with love

In my workshops, I often talk about the power of sharing and receiving the story of a micro-moment – a brief genuine exchange, not just with a friend or loved one, but even with a stranger. Social Psychologist Barbara Fredrickson coined the term micro-moments while studying how these exchanges have the potential to help heal our bodies. I believe we’ve all had moments when we have unexpectedly connected with someone, or a time when we were moved by a stranger.

The Connection Cure is so much about being open to these surprises and being aware of the times when these micro-moments have shifted me. In it’s essence, this is what I am doing in each state across the U.S – experiencing moments of connection. In an effort to increase the vulnerability of my experience, I’m starting, rather slowly, to share these moments with you. My hope is that overtime, you will start to share your micro-moment stories with me, in return.
____________________

He invited me over for dinner before I even knew his full name. We had met less than an hour ago in a yurt park in Kelly, Wyoming, a place I ended up in after a long conversation with a stranger in a coffee shop, which quickly turned into an invitation to spend the night in her yurt beside the Grand Teton mountains. Sam and I had met only a few hours earlier, while following Nicole down to the river on bicycles. While she swam in the freezing cold water, Sam and I sat on the rocks and shared stories. The longer we spoke, the more open we became, and before Nicole was done with her swim, Sam and I had already shared secrets.

Maybe our stories came out because of the earth, a totally made up idea I have that we are more apt to be vulnerable when we’re in nature, because there is no one around to eavesdrop except the trees. Or, maybe it was more simple than that– a chance meeting in a yurt park where two strangers would likely never meet again.

Either way, by the time we biked backed to the yurt there was an unspoken sense of closeness between us.

It was only a few minutes before dusk when Nicole headed into town, leaving me seated outside her home to take in the sunset. “You should go hang out with Sam,” she offered. “I think he could use the company.” It was less than ten minutes after she left that I saw him emerge from his yurt and begin the walk down the path towards me. He was moving with trepidation, a beer in his right hand to keep him company.

“Do you have any food here? I can cook you some dinner or you can come have a glass of wine?” He paused and then continued, “I feel like we should talk more.”

I followed him back to his yurt just as the sun was setting, the thought not yet crossing my mind that I was stepping into the secluded home of a strange man I had only just met.

It was Septmeber 27th, and earlier that day before heading out to the coffee shop, I spent the morning crying in the shower while listening to Christine Blasey Ford’s testimony. Like so many women, I was incredibly triggered. I was also far from home and feeling incredibly lonely. So much of the day felt like a blur, and I found myself wondering why every single person I passed in Jackson Hole wasn’t talking about how angry they were. I wanted to talk about it, to rage about it, to scream about it all, but instead here I was, following Sam into his yurt aglow with Christmas tree lights, a small couch for two, and a chair, which he sat in across from me.

His yurt looked well lived in and above his refrigerator hung pictures of a blonde woman with an immense smile. “Cancer,” he told me. “She died a year ago.”

She was his wife, and they had shared this one room yurt for the last eleven years.

There was something about the dimness of the light and the glow of the fire that intensified the sacredness of his story. And here I was, a stranger on their couch, listening to him share the story of how they met, and how she passed. “I rearranged the room after she was gone,” he told me. “The bed used to be over here,” he said pointing to the other side of the room. I sat in amazement, thinking about the depth of love two people like them must have shared, living in one tiny room for eleven years. I told him so. “She was so easy going,” Sam said, and I could see him glance down and then up again, lost in his memories. “I’m not usually like this,” he said.

“I don’t usually share this kind of stuff. I spend a lot of time alone, and most people don’t really consider me a talker. But, it’s easy to talk to you, maybe because I’ll never see you again? I’m not sure.”

I wasn’t sure either. I had never felt a moment quite like this one. Raw and quite literally, dim. He had paused his storytelling, and I could sense he was hoping I would begin. “Today has been really hard for me,” I began. And I told him how angry, confused, upset, and triggered I was. Then, maybe because I might never seen him again, or maybe because it all sort of felt like a dream anyway, I began to tell him my deepest secrets, opening up my most protected scars. It felt safe to cry in the dim light and I shared with him stories I have not shared with a single soul before.

I asked for more wine and Sam got up and walked over to the fridge, opening its door, fully illuminating him. It was the first time all night I could see him clearly, if only briefly, before he closed the door holding a Tupperware of rice and vegetables.

When it was close to midnight he gave me his winter coat and a headlamp to wear on the walk back to Nicole’s. He strolled beside me underneath the moonlight, the Grand Tetons as our backdrop. We hugged goodbye, and that night I fell asleep bundled up in this strange mans jacket, filled with his stories, his loneliness, and his love.

The next morning before I left town I knocked on his door but he was already gone. I walked inside, the smell of wood smoke still in the air. It felt different in the daylight, more superficial, less mystifying. It felt wrong being in there without him, like stepping into someone’s storybook without permission. I thought about leaving him a note, but instead I just hung up his jacket on the hook by the door, and let the screen door close quietly behind me on my way out. 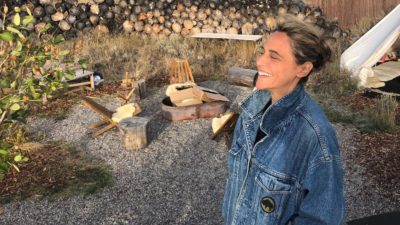